By 'eck it's Champion the Wonder Horse

Interesting conversation about favorite childhood TV shows came up today...and I mentioned one of mine 'Champion the Wonder Horse' expecting from my American friends oohs of nostalgia and enthusiastic sobs of remembrance loud enough to match my own...not a one! Blank stares and 'Are you sure it wasn't a British show?' was all I got.


Hang on. No, this was definitely an American TV show...it was a western, they had those funny American accents...and it had cowboys.  Definitely not British made ...if it was, in some place like Yorkshire, the shouts of 'by 'ecks' and the flat caps would have given the game away.  I may have been 7 or 8 at the time but I knew there weren't cowboys on the Yorkshire Moors.  Well, none that had a wonder horse.

I watched it every Saturday afternoon at my Grandma's during the summer holidays.  I sang along to the theme tune EVERY time it came on, (and I can invoke that tune now like I can recite, parrot fashion, the 'Lords Prayer' from my school assembly or my times table without even thinking, literally no conscious thought at all...). 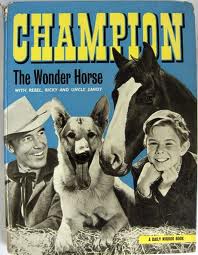 I googled furiously just to make sure I wasn't having some weird false memory issue - and there it was in glorious black and white on YouTube. So, there were other 1950's black and white western TV show geeks out there too!

The only memory that proved to be a bit shaky was the show title.  It was actually called 'The Adventures of Champion'.

A TV gem from the 1950's that played on British telly back in the 1970's was all about Champion, a wild stallion who with Rebel the faithful German shepherd dog, rescued their boy pal, 12 yr old Ricky every week without fail and oh, how I loved him.

Bit of trivia I did not know - the horse who played Champion was owned by Gene Autry, who also produced the show...hmmm America's Favorite Singing Cowboy, hello!