I get asked a lot about the origins of my wrist tattoo, and apart from the most often asked 'What does it mean?', I get asked 'What are all the lines?'.
For those I haven't already caused a glazing of the eyes here's the Wikipedia definition of the Ogham script used in the tattoo:

Ogham (English pronunciation: /ˈoʊ.əm/or/ˈɒɡəm/; Old Irish, ogam pronounced [ˈɔɣamˠ], Modern Irish [ˈoːmˠ] or [ˈoːəmˠ]) is an Early Medieval alphabet used primarily to write the Old Irish language, and occasionally the Brythonic language.[3] Ogham is sometimes called the "Celtic Tree Alphabet", based on a High Medieval Bríatharogam tradition ascribing names of trees to the individual letters. There are roughly 400 surviving ogham inscriptions on stone monuments throughout Ireland and western Britain, the bulk of them are in the south of Ireland, in Counties Kerry, Cork and Waterford. The largest number outside of Ireland is in Pembrokeshire in Wales. The remainder are mostly in south-eastern Ireland, Scotland, the Isle of Man, and England around the Devon/Cornwall border. 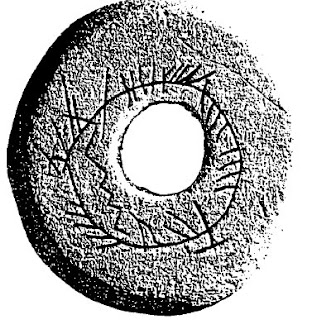 A great example of carved Ogham is the Buckquoy spindle-whorl: 'a famous spindle-worl dating from the Early Middle Ages, probably the 8th century, excavated in 1970 in Buckquoy, Birsay Orkney, Scotland.  Made of sandy limestone, it is about 36 mm in diameter and 10 mm thick.[2] It has achieved fame because of its ogham inscription. The inscription was once used as proof that the Pictish language was not Indo-European.  In 1995 historian Katherine Forsyth claimed that it was a standard Old Irish ogham benedictory message, Benddact anim L. meaning "a blessing on the soul of L.".[4]     Source: Wikipedia

Even though the particular chapter of my life transcribed in Ogham in my tat is now closed, I still love the simplicity of the lines, the physical link to a culture long gone and the natural spiral reminding me of the continuing path into our futures.

Email ThisBlogThis!Share to TwitterShare to FacebookShare to Pinterest
Labels: tattoos